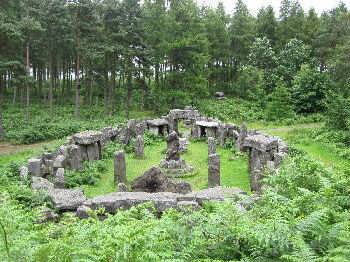 Some more views of the Druids' Temple

The Druids' Temple near is actually a Victorian folly, not far from Ilton near Masham.

The folly was built under the instruction of William Danby, who commissioned its construction as a philanthropic exercise to create employment for his workers from the local Swinton Hall estate.

In its secluded wooded location the Druid's Temple is a relatively little visited attraction and as such has been featured in the BBC TV series "Hidden Britain". It has also been used as a setting in an episode of the ITV detective drama series "A Touch of Frost".