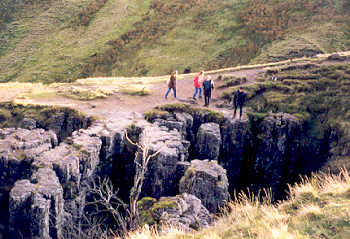 The Buttertubs are a group of fluted limestone potholes, just off the roadside near the summit of the Buttertubs Pass.

One theory holds that the buttertubs were so named because travellers over the pass used to lower butter churns down them to keep produce cool while travelling to market, though it is possible that the fluted potholes were just called buttertubs because they simply look like buttertubs..