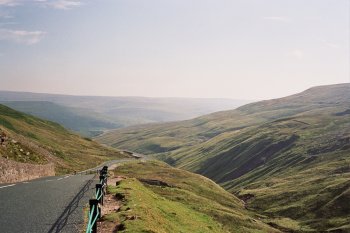 Buttertubs Pass is a spectacular high mountain road which leads from the hamlet of Hardraw (famous for the nearby waterfall of Hardraw Force) near Hawes in Wensleydale and over the fells and on in to Swaledale.

The pass is so called because near its summit the road passes by a group of fluted limestone potholes which are known as the "Buttertubs".

On Saturday 5th July 2014 amazing scenes at the Buttertubs Pass were relayed round the world, as huge crowds gathered to watch world champion cyclists tacking the first stage of the Grand Depart of the Tour de France.