Quarrying in the Yorkshire Dales 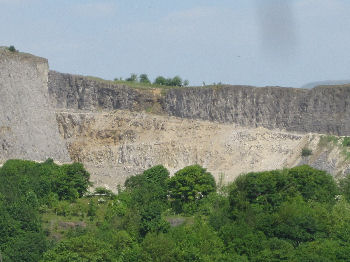 More views of quarrying in the Yorkshire Dales

The presence of limestone and other types of rock in the Yorkshire Dales has led to the development of several large industrial quarries where materials are extracted for use as e.g. aggregates in road building and the construction industry, etc. Quarrying on this scale inevitably leads to irreversible environmental damage, including the permanent scarring and removal of entire hillsides and natural features and in some cases the destruction of rare habitats such as limestone pavements as well as other significant national assets.

There are of course arguments both for and against quarrying in the Yorkshire Dales and other established national parks and areas of outstanding natural beauty, though it should be noted that despite the promised implementation of proposed "aftercare" programmes the environmental effects and damage caused by quarrying are both large scale and permanent. Furthermore, there could well be a negative economic impact on the tourist industry caused by these kind of operations, as quarrying using modern methods is generally highly intrusive and those areas which are affected are unlikely to fulfil their true potential in attracting visitors from the UK and abroad.

It might also be worth questioning the so-called "logic" which dictates that much of the rock extracted from the dales and other supposedly "protected" national parks and areas of outstanding natural beauty ends up going to build yet more roads - resulting in the destruction and concreting over of what is left of the countryside in other parts of Britain. All this at a time when alternative strategies should be being investigated and employed in order to counter the potentially cataclysmic effects of global warming.