Limestone Pavements in the Yorkshire Dales 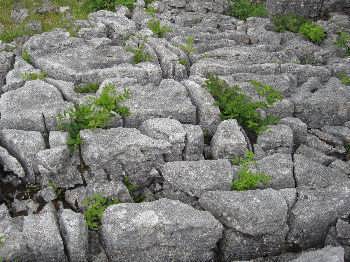 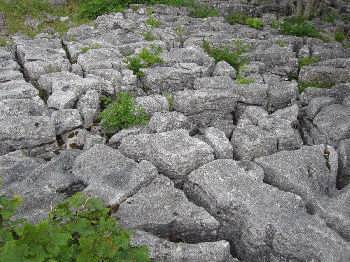 The geology of the Yorkshire Dales is predominantly of limestone, which gives rise to many spectacular and scenic surface (as well as underground) natural features. One such type of surface feature are the "limestone pavements" - plateaus of bare and weathered rock often being found at the top of the limestone cliffs (known locally as "scars") running along the hillsides. These were originally formed by the scouring action of glaciers during the last ice age, excellent examples being seen at e.g. the top of Malham Cove, White Scars and Southerscales (near Ingleton) and on the plateau of Moughton (near Austwick).

Due to the mildly corrosive effects of slightly acidic rain water on the limestone (a process which also leads to the formation of caves and potholes in the dales) deep crevases slowly develop in the rock so that the limestone pavements are actually a "mosaic" of interlocking "clints" and "grykes" (which makes these limestone pavements - despite their name - actually quite difficult and hazardous to walk across !)

Rare alpine plants (including saxifrage) flourish in the crevases, and limestone pavements offer a unique habitat for many species. Unfortunately,however, some of the finest examples of limestone pavements are under threat, not just from casual visitors attempting to collect rockery materials for their gardens (which is actually illegal in protected areas), but in some cases from large scale industrial quarrying operations (which are still permitted to take place even within the boundaries of the national park).