The Geology of the Yorkshire Dales 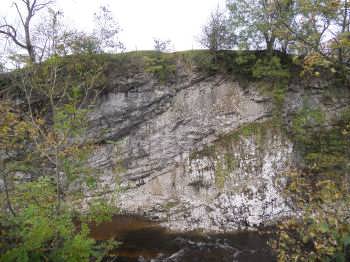 The spectacular scenery of the Yorkshire Dales is a direct result of the area's unique geology - predominantly carboniferous limestone (including Great Scar Limestone and the "Yoredale Series" of layered limestones interspersed with shales and sandstones), capped on the higher fells by Millstone Grit.

Much of what is now known as the Yorkshire Dales lies on an area roughly defined by the underlying Askrigg Block, bordered to the south and west by the Craven Fault (which marks an approximate boundary with Bowland and Pendle to the west and south west, and Bronte Country to the south west and the south). To the north and north west west the Askrigg Block is bordered by the Dent Fault (which runs along Dentdale marking a natural boundary with the much older Silurian and Ordovician rocks of the Howgill Fells to the north). To the east the rocks overlaying the Askrigg Block dip below more recent sediments which form the valley floor of the Vale of York and the Vale of Mowbray.

There are also many spectacular karstic limestone features on the surface, including cliffs and gorges such as Malham Cove and Gordale Scar near Malham, as well as limestone pavements (which were formed by the scouring action of glaciers on the bedrock). The layered structure of the Yoredale Series in particular is conducive to the formation of fine waterfalls such as Hardraw Force and Aysgarth Falls in Wensleydale (along with many others).

Other kinds of limestone features found in the dales include reef knolls (conically shaped and fossil rich hills which formed as coral atols in the shallow waters of an ancient prehistoric sea). Fine examples of these kinds of reef knolls (which generally run along the southern edges of the Craven Fault) can be found on Scosthrop Moor above Settle, in the southern part of Malhamdale and perhaps most famously at the Cracoe Reef Knolls (which lie between the villages of Rylstone and Cracoe and Burnsall in Lower Wharfedale).

Beyond the Stainmore Gap the most northern of the traditional "Yorkshire" dales area (including Teesdale - which is now in County Durham) sees the intrusion of the Whin Sill, an igneous dolerite rock which is responsible for spectacular features such as the waterfalls at Low Force, High Force and Cauldron Snout on the upper Tees river.

Water in various forms has in fact played a major role in the shaping of the dales, and as forerunners of today's rivers the glaciers of the last ice ages carved out many of the classic "U" shaped valleys as seen today. When the glaciers retreated they left behind banks of moraine (such as at Raven Ray in Kingsdale near Ingleton), lakes (such as Semerwater in Raydale), "stranded" transported boulders (such as the famous Norber erratics near Austwick) and fields of "drumlins" (particularly fine examples of which can be seen at Ribblehead. Perhaps the most dramatic evidence of the power of these rivers of ice however can be seen at Kilnsey Crag, where the glacier which carved out Upper Wharfedale cut through the base of the rock leaving the famous overhang behind!

Mineral deposits are relatively common in the dales, and in days gone by lead mining was a common provider of employment: veins having been worked primarily on Grassington Moor, Greenhow Hill and also in Arkengarthdale and Swaledale. In fact, several of today's "honeypot" dales villages (including Grassington in Wharfedale and Pateley Bridge in Nidderdale) originally grew up to service this old industry.

Today the miners have all gone, but limestone and other types of rock present in the dales are sought after by the construction industry, - and despite the environmental damage incurred by open cast extraction there are actually several large scale quarries operating even within the boundaries of the national park. [N.B. Please click here for more information about quarrying in the Yorkshire Dales.]