Mining in the Yorkshire Dales 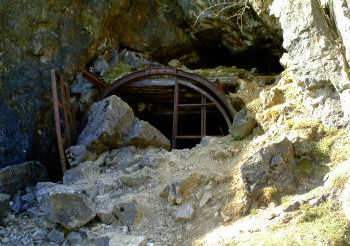 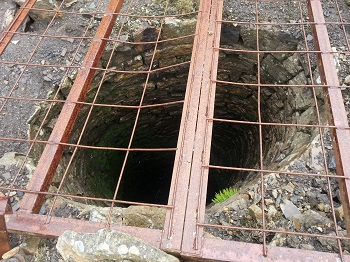 Owing to the geology of the area the rocks of the Yorkshire Dales are endowed with mineral deposits which have attracted industrial activity since Roman times (and possibly even before then).

Of particular interest over the centuries has been the presence of galena (a lead ore) which occurs within veins which have been exposed in places at the surface and running deep underground in continuous threads through the rock. Galena is first believed to have been mined on any significant scale in the dales by the Romans, who began their efforts using "hushes" (artificial gullies created by the scouring action of large amounts of water suddenly and deliberately released from specially constructed reservoir dams built high up on the fells).

This clever technique was used to expose mineral veins at the surface, though once these has been exhausted it became then necessary to follow the veins underground in order to extract more of the valuable ore. Initially the method used was simply to follow the vein in to the rock from the surface, though over time more sophisticated systems of horizontal or near horizontal levels (called "adits") were dug, interspersed with vertical shafts which were used to extract the ore via pulleys and which also provided ventilation. Special drainage adits were also dug with the specific purpose of draining away water (the risk of flooding being an ever present and ongoing problem in these kind of mining operations).

On the surface smelting mills and chimneys were constructed to process the ore and convert it in to lead "pigs" ready for sale on the commercial market. Several of these chimneys (and the flues which were built to channel hot gases in to them) are still standing today - fine examples of which can be seen on Malham Moor and at Yarnbury on Grassington Moor.

Besides galena other mineral ores are present in the rocks of the Yorkshire Dales area, with calamine (an ore of zinc) having been mined at Pikedaw Hill near Malham as well as flourspar and some coal measures near Ingleton too.

In the late 19th century lead mining became generally uneconomic and most of the mines were abandoned. However a small flourspar mine at Gill Heads near Grassington continued operating up in to the 1980s.