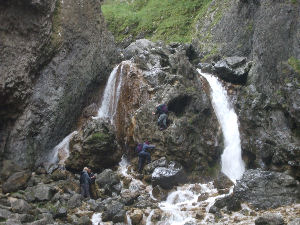 Some more views of Gordale Scar

[N.B. To get some idea of the scale, note the person in the middle distance at the foot of the cliff face on the right...]

A great limestone gorge near Malham some 400 feet (150 m) deep, Gordale Scar is a spectacular feature of the Craven Fault and is believed by some geologists to be the remains of a huge underground cavern whose roof collapsed around the time of the last ice age. Less dramatic theories, however, have the gorge being formed as a glacial meltwater channel.

Whatever Gordale Scar's origins actually are, today Gordale Beck cascades down the ravine in three separate waterfalls, the higher of which pours through a natural arch in the rock above the lower (double) waterfalls. A short scramble takes visitors (at their own risk !) up the tufa* deposits at the lower (double) waterfalls into the top section of the gorge, where a route leads out in to the upper part of Gordale and on towards Malham Tarn.

[N.B. * = Tufa is a smooth limestone deposit usually formed when water containing calcium carbonate passes over exposed rock. Another fine example of this type of deposit can be seen downstream in Gordale at the nearby waterfall of Janet's Foss.]

More recently Gordale Scar has been used as the location for scenes in the BBC historical fantasy drama TV series "Jonathan Strange and Mr. Norrell".