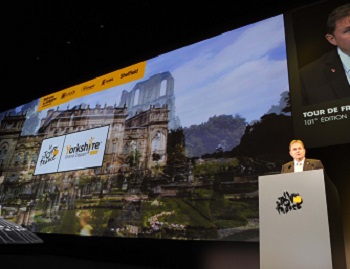 The above photograph appears by courtesy of Welcome to Yorkshire

A delegation from Yorkshire recently attended a ceremony in Paris to announce details of the Grand Dťpart of the Tour de France, which will be visiting both the Yorkshire Dales and Bronte Country in July 2014.

Gary Verity, chief executive of tourism agency Welcome to Yorkshire, said: "It was an honour to be able to represent Yorkshire at the presentation today and to showcase our proud county. Yorkshireís will be the greatest Grand Dťpart in the history of the Tour de France. We will raise the bar for all future hosts with our Cultural Festival 100 days before the race, two stunning stages and a legacy that leaves a cycling imprint on the county which lasts for generations. The Grand Dťpart will put Yorkshire on the map as a destination capable of hosting world class events in a world class location, providing a springboard to greater things. We are excited, we are proud and we are ready to welcome the world."

Christian Prudhomme, director of the Tour de France, said: "We are excited to take Le Tour back to Britain again. I know the Grand Dťpart in Yorkshire will be visually stunning and technically challenging and the third stage from the cycling city of Cambridge to the historic heart of London will provide a fitting finale. The British cycling fans are passionate people and I am sure they will line the routes of the three stages cheering the teams and riders all the way from Yorkshire to London, providing an unforgettable start to the 2014 Tour."

Keith Wakefield, Leader of Leeds City Council, said: "The Tour de France Grand Dťpart will be the biggest event hosted in Leeds and Yorkshire in living memory. You can sense the anticipation level rising by the day as people start planning where they will watch from to be able to say 'I was there' at this once-in-a-lifetime experience.

"This is an unrivalled opportunity not only to raise the profile of Leeds and Yorkshire to new heights, but also to inspire people of all ages to get on bikes and create a lasting legacy that is fitting for such a sporting phenomenon. This journey has already started and I'm so pleased that a group of young people representing Leeds have been able to share today's excitement and sample a flavour of what is yet to come."

A first phase of new waymarked signs are being installed by North Yorkshire County Council along the route of Stage One. Approximately 50 will be used to guide people around the route with plans for most of the new signs to be in place by early 2014.

Early plans are also being drawn up for a sportive event which would see cyclists riding the route of the Grand Dťpart in the weeks before the professional peloton. There are also plans to use the visit of the Tour de France as a catalyst to attract more international cycle races to Yorkshire as part of the Grand Dťpart Legacy programme.

The Grand Dťpart of the Tour de France takes place in Yorkshire on the weekend of the 5th and the 6th July 2014. The first stage races from Leeds to Harrogate through the Yorkshire Dales and the second stage races from York to Sheffield via Bronte Country and the northern reaches of the Peak District and South Yorkshire. The third stage takes place on the 7th July 2014 from Cambridge to London before the race moves on to France.

For more information about cycling in Yorkshire please visit http://www.cycleyorkshire.org

[News item based on press release supplied by Welcome to Yorkshire, posted October 2013.]