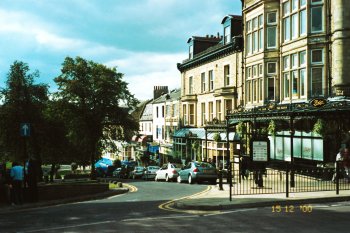 Some more views of Harrogate

Harrogate is a pleasant spa town to the south-east of the Yorkshire Dales, famous for its tea shops, flower shows, turkish baths, antique shops, and the Harrogate Convention Centre. The Eurovision Contest was held here in 1982 following Bucks Fizz's win for the UK in Dublin the previous year.

The town is also famous for its associations with the great English crime novelist Agatha Christie, who "disappeared" for 11 days in December 1926 and was subsequently found at what is now known as the Old Swan Hotel..

Nearby attractions include Harewood House, Almscliffe Crag, Ripley Castle, Fountains Abbey, Plumpton Rocks and Knaresborough, as well as Nidderdale, the Washburn Valley and of course, the Yorkshire Dales National Park itself.

In July 2014 the eyes of the world were again on Harrogate as the Grand Depart of the Tour de France came through the town not once but twice, and was the scene of an exciting finish on Day One which will no doubt live in cycling history!