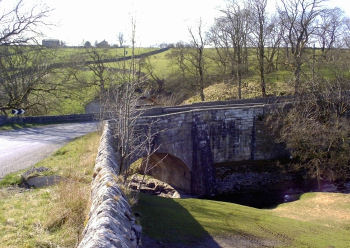 Dibble's Bridge in Dibblesdale carries the B6265 road (from Grassington to Pateley Bridge) over the River Dibb - one of England's shortest rivers.

Legend has it that the bridge was constructed by the "Dibble" (or Devil) as some kind of favour to a local shoemaker. [Bridge building seems to have been some sort of hobby for Old Beelzebub - as the Devil's Bridge at Kirkby Lonsdale (along with others in the country) are said to have been constructed in a similar fashion !]

In May 1975 Dibble's Bridge became the scene of Britain's biggest motoring accident to date, when thirty three passengers and driver were killed when the brakes on their coach failed, leaving only thirteen survivors. In June 1925 there was a very similar coach accident - also involving brake failure - which claimed seven lives.