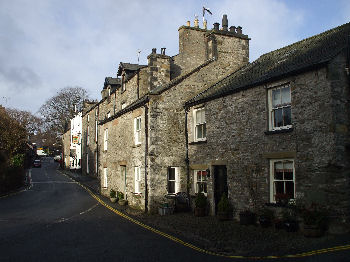 Some more views of Kirkby Lonsdale

Situated beyond Ingleton on the main A65 which runs along the edge of the Yorkshire Dales from Skipton to Kendal in Cumbria, Kirkby Lonsdale makes an excellent base not only for exploring the northern dales (including the Howgill Fells), but also the English Lake District to the north west.

Just outside this small town is the Devil's Bridge, which spans the River Lune and which was (like the similarly named Dibble's Bridge in Dibblesdale) reputedly built by Satan himself (hence the name). On a more reliably documented note John Ruskin was also associated with the area, and just up the road is "Ruskin's View" - from where a vantage point which looks over the Lune Valley towards Casterton Fell and Barbondale, the scene having been painted by J.M.W. Turner.

Also nearby is the village of Cowan Bridge where the local school provided the inspiration for "Lowood School" in Charlotte Bronte's "Jane Eyre". [N.B. Further information about places connected with the Brontes can be found on the Bronte Country website.]