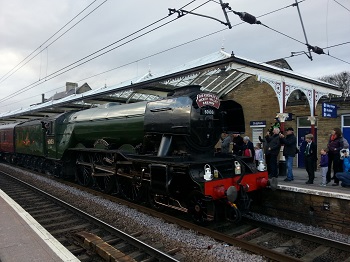 Less than two months after a special steam service was run on the Settle Carlisle railway the line saw more steam traction action with a visit from the Flying Scotsman (pictured above in Skipton) - possibly the world's most famous steam locomotive!

On Friday 31st March 2017 the Flying Scotsman hauled a specially chartered train on the Settle Carlisle railway to mark the official reopening of the complete line running all the way to Carlisle, the section from Appleby to Carlisle having been closed back in February 2016 due to evidence of land movements at Eden Brows near Armathwaite caused by heavy rainfall over the course of the winter. [N.B. The winter of 2015 / 2016 saw much flooding in the region, and the unprecedented (at least in recent history) return of a spectacular waterfall at Malham Cove.]

Having completed its duties in officially reopening the full length of the line the Flying Scotsman then travelled on to Skipton and Keighley in West Yorkshire's Bronte Country to begin a special guest visit to the Keighley and Worth Valley Railway where this magnificent engine will be running trains as a special attraction over the course of the first week of April 2017.

For more information about steam railways in Yorkshire and the north of England please visit the Eagle Intermedia Steam and Railway Links website.