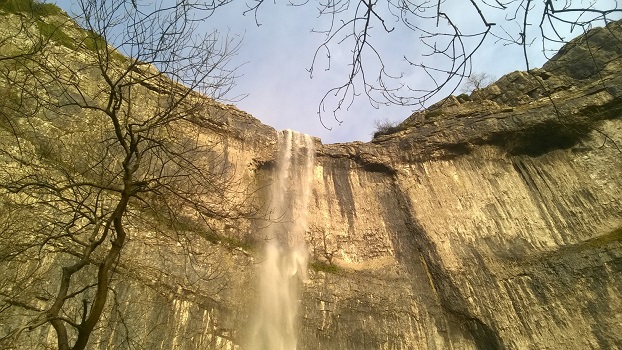 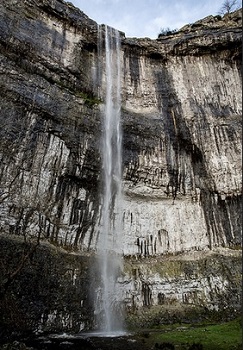 The above photographs appear by kind courtesy of Stacey McCann and John Sarjent.

Heavy rainfall from "Storm Desmond" over the North of England has led to an incredible happening in the Yorkshire Dales..

Over the weekend of 5th - 6th December 2015 very heavy rainfall from the storm led to swollen rivers and streams and flooding, with the stream issuing from Malham Tarn making the journey beyond Water Sinks (where the infant waters of the River Aire usually disappear underground) and on down the (usually dry) Valley of the Watlowes to Malham Cove for the first time in recent history.

Besides creating some spectacular waterfalls in the "dry" Watlowes Valley itself the flood waters carried on to Malham Cove, tumbling over the precipice of what is usually a dry limestone cliff face to create what is believed to have been Britain's highest surface waterfall* - at least for a few hours before the flood surge subsided.

Malham Cove was once the scene of a very large waterfall back in prehistoric times (when glacial meltwaters from the last ice age would have crashed over its edge). Today Malham Beck issues from its base, and it is believed that there has not been any water falling here for at least hundreds of years (when a similar kind of storm surge was most probably the likely cause of the flow back then).

Staining on the face of the cliff face and erosion does in the middle of the precipice does seem to indicate that water has flowed (perhaps frequently) since the ice age, and there were apparently plans back in Victorian times to divert waters from Malham Tarn to artificially recreate the spectacle. For a few days in December 2015, however, it seems that nature - and specifically the deluge of "Storm Desmond" - has done the job instead !

* Temporary spectacles aside, two of Britain's highest waterfalls are also in the Yorkshire Dales region: Hardraw Force near Hawes in Upper Wensleydale, and the (underground) fall of Fell Beck in to the main chamber of Gaping Gill on the western flanks of Ingleborough. As permanent water courses it can only be assumed that in the floods these waterfalls (as well as other waterfalls in the Yorkshire Dales) would have been very spectacular over the "Storm Desmond" weekend of 5th - 6th December 2015 indeed !