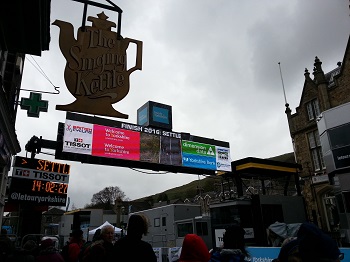 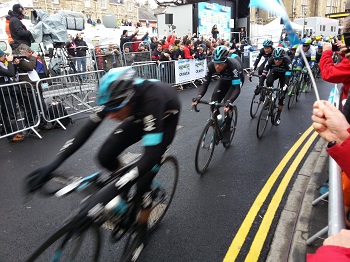 The end of April and the May Bank Holiday weekend of 2016 saw the second "Tour de Yorkshire" cycling event taking place in the Yorkshire region, with the first stage of the event (which took place on Friday 29th April 2016) passing through the southern part of the Yorkshire Dales, and the second stage (which took place on Saturday 30th April 2016) taking in the lower end of Lower Wharfedale too.

Starting out on the Friday in the market town of Beverley over to the east in the Yorkshire Wolds the cyclists raced westwards across the falt plains of the Vale of York to Knaresborough and then in to the hillier terrain of the south eastern Yorkshire Dales, meeting the first challenging "King of the Mountain" stretch just beyond Pateley Bridge with the ascent of Greenhow Hill.

From there the cyclists descended in to Grassington and through the villages of Cracoe and Hetton before joining the main A65 trunk road at Gargrave. The route then ran along the southernmost edge of the western Yorkshire Dales area through Coniston Cold, Hellifield and Long Preston for an exciting finish in Settle (pictured above) - but not before having had to cycle an additional 12km sprint loop out to Buckhaw Brow and Giggleswick ! 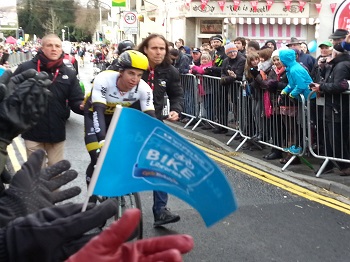 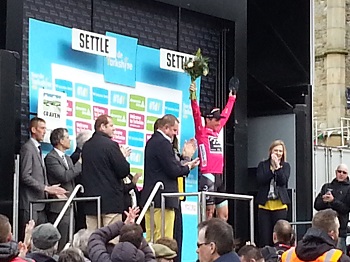 The stage was won by Dylan Groenewegen of the Netherlands for Team LottoNL-Jumbo. Sir Bradley Wiggins dropped out of the race about 26km from the finish but Britain's Pete Williams (who comes from nearby Skipton of One Pro Cycling won the "King of the Mountain" pink jersey as well as the grey jersey for "combativity" too !

The second stage took place the following day, with the riders setting off from Otley near the end of Lower Wharfedale on a route which took them eastwards out of the Yorkshire Dales area and back in to the Vale of York and then southwards down in to South Yorkshire.

There was also a women's race, with world champion Lizzie Armstead (who actually comes from Otley) competing, though it was Kirsten Wild who crossed the finishing line first in Doncaster, while Team Sky's Dutch Danny van Poppel won the men's race.

Despite some very unseasonal inclement weather (including some snow in the area in the morning of the Friday) and technical problems with broadcasting the men's and women's races (on the Saturday) the Yorkshire Dales stages of this second "Tour de Yorkshire" were heralded a great success, with the annual event looking set to further consolidate the area's already well established reputation for international cycling.