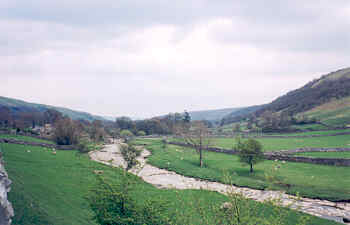 Some more views of Littondale

Littondale is a tributary valley of Wharfedale named after the village of Litton rather than its river, the River Skirfare, which rises on moors below the eastern flank of Pen-y-Ghent and meets the River Wharfe just above Kilnsey in Upper Wharfedale.

The geology of Littondale is predominantly limestone, and much of the Skirface actually flows underground - with the river bed drying up on the surface during times of relative drought. There are several significant cave systems in and around the area, including Skoska Cave, Doukabottom Cave and the notorious Sleets Gill Cave.

Hamlets and villages in Littondale include Foxup, Halton Gill, Litton, and Arncliffe (the latter being the original fictional setting for the earliest episodes of TV's Emmerdale Farm - which is now known simply as Emmerdale). [N.B. The old norse name for this valley was "Amerdale", and it is believed that this is from where the fictional location may have derived its name..]